We are pleased to announce the latest Ford Foundation funded project in Viet Nam. It will involve the Office of the National Steering Committee 33, Hatfield Consultants (Canada), the Ministry of National Defence (Viet Nam), the Health Department of Da Nang City, and the American Academy for the Advancement of Science (AAAS).

In 2006, with financial support from the Ford Foundation and Ministry of Natural Resources and Environment (MONRE), Office of National Steering Committee 33 cooperated with Hatfield Consultants and the Ministry of National Defence (MOD) in executing a comprehensive assessment on dioxin contamination in three dioxin hotspots at the northern sector of the Da Nang airbase, as well as in high-risk populations living near these hotspots. This research successfully provided important data regarding dioxin contamination at the northern end of the base, and highlighted the high risk for contamination to certain segments of the local population. These facts have raised public concern related to impacts of dioxin contamination on human health and subsequently, have led to implementation of four interim measures in 2007 to minimize risk of the contamination to local communities. 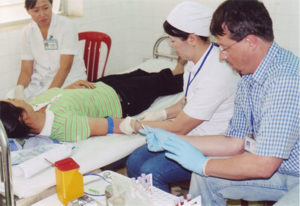 In June 2006, a join workshop was organized by MOD and US Department of Defence (DOD) in Ha Noi regarding common concerns on the dioxin issue. Several important pieces of information were shared between the two sides at this workshop, including a mission referred to as ‘Pacer Ivy’ which was launched after decision to halt Operation Ranch Hand. Major activities in the Pacer Ivy mission were to collect unused herbicides barrels, clean or dump such chemicals, and transport herbicides to Johnston Island. Due to severe conditions of the conflict in 1972, activities of the Pacer Ivy mission were not appropriately carried out. For example, wastewater from cleaning the herbicides barrels was discharged direct to ground; herbicide re-filling was done by workers of local civil companies with inappropriate caution, etc. As a consequence, areas used for Pacer Ivy became highly contaminated with herbicides and dioxin. Unfortunately, archives relating to existence of these sites had not been available until the workshop in June 2007.

The major objectives of the present project is to clarify dioxin contamination in the environment and human population in the remaining areas of the Da Nang airbase, and to improve environmental management, scientific exchange and public awareness so that appropriate strategies may be developed to address protection of human health, environmental governance and planning for future remediation.

Major activities of this project will focus on three important components:

A) Assessment of dioxin contamination in the environment in and near Pacer Ivy sites, including the effectiveness of interim measures implemented on the airbase;

B) Tracking bio-accumulation of dioxin in local food chains and the human population; and