Hatfield has received additional funding from Fisheries and Oceans Canada (DFO) and the Cumulative Environmental Management Association (CEMA) to build upon a project funded by the Canadian Space Agency (CSA), focused on the use of RADARSAT-2 imagery for instream flow needs (IFN) monitoring in the lower Athabasca River watershed. The additional funding provided by DFO and CEMA will assess fish access into tributaries from the Athabasca River and whether there is winter connectivity. 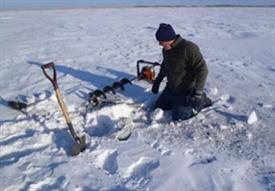 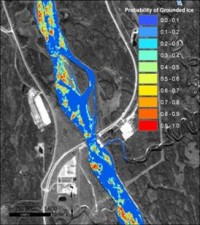 Probability of ground ice in the Athabasca River, February-March 2011. 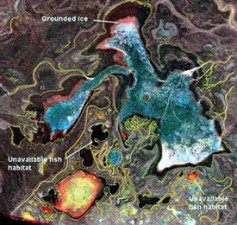 Through the CSA’s Earth Observation and Application Development Program (EOADP), Hatfield is implementing a project to test and demonstrate the use of RADARSAT-2 imagery for IFN monitoring in the lower Athabasca River watershed. Key collaborating groups include DFO, Parks Canada, Alberta Environment and Water (AEW), and the monitoring task group of CEMA.

Environmental management of the Athabasca oil sands region in Alberta is a high priority of the federal and Alberta governments, particularly given the rapid pace of expansion of oil sands development in this region in the past decade. The Project was developed to respond to the lack of information for regional assessments of available instream fish habitat, a critical environmental need in Northern Alberta.

Through the Project, advancement in fish habitat modeling using radar remote sensing will provide Fisheries and Oceans Canada (DFO) and other government users with valuable IFN monitoring tools to use in the oil-sands region, and which can also be applied to other large Canadian rivers and lakes.

Water withdrawal from the Athabasca River by oil-sands operators has been identified as a key issue of concern by government agencies, Aboriginal communities, and the general public. Water withdrawals from the Athabasca River have the potential to affect instream habitats for fish and other aquatic organisms, habitat connectivity, and dissolved oxygen levels, particularly in areas of fish overwintering. These changes to aquatic habitat can affect the abundance and distribution of aquatic organisms, including fish species, and impact ecosystem health. Stream flows required to maintain and protect usable fish habitats are defined as instream flow needs (IFN), and are assessed on a stream-specific basis.

Preliminary results from the 2011 winter season illustrated the capacity of RADARSAT-2 to identify unavailable aquatic habitats (i.e., those with grounded ice) in portions of the Athabasca River. Results have also demonstrated the potential to determine channel connectivity within the Peace-Athabasca Delta, a UNESCO World Heritage Site. The aim for the next phase of the project is to apply these derived habitat metrics as input data into IFN models, with the overall goal of integrating RADARSAT-2 data into the long-term, operational monitoring of fish habitats.

The initial results of the CSA’s funded project have been very encouraging and have led the project end users, including the DFO and CEMA to fund additional project activities.