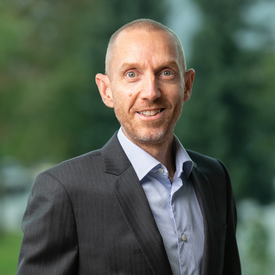 Originally from the UK, Andy joined Hatfield in 2004 after obtaining his Ph.D. in ecology and remote sensing. Andy is inspired by the opportunities to apply remote sensing technologies to support the sustainable development and environmental monitoring goals of Hatfield’s clients in Canada and internationally. Hatfield’s innovative and adventurous spirit is revealed in the work that Andy leads in our Geomatics Group, from monitoring resource development to biodiversity conservation. In his leadership role, Andy has worked for major companies, space agencies, international finance institutions, and United Nations agencies, such as the Food and Agriculture Organization. He lived in Indonesia from 2008 to 2011 as Vice President of Hatfield Indonesia and was Director of Calgary Operations from 2015 to 2016.

Andy is an avid bike commuter and keen marathon runner, having completed the Boston, Berlin, and London races, with his sights set on completing all the major marathons.